Welcome to the Bronx Terminal Market Pop Up Experience!

The Pop Up Experience was created to allow local Bronx artists and businesses the opportunity to display their artwork and wares, and also to connect with the community they share.

First up! Please join us in welcoming renowned artist André Trenier in his first Pop-Up studio. Experience André’s portraits and street scenes up close and meet the artist himself. During André’s residence, planned activities will include intimate gatherings, painting demonstrations, previews and more, which will be announced soon.

Located on the Ground Level, Exterior Street (adjacent to Subway) 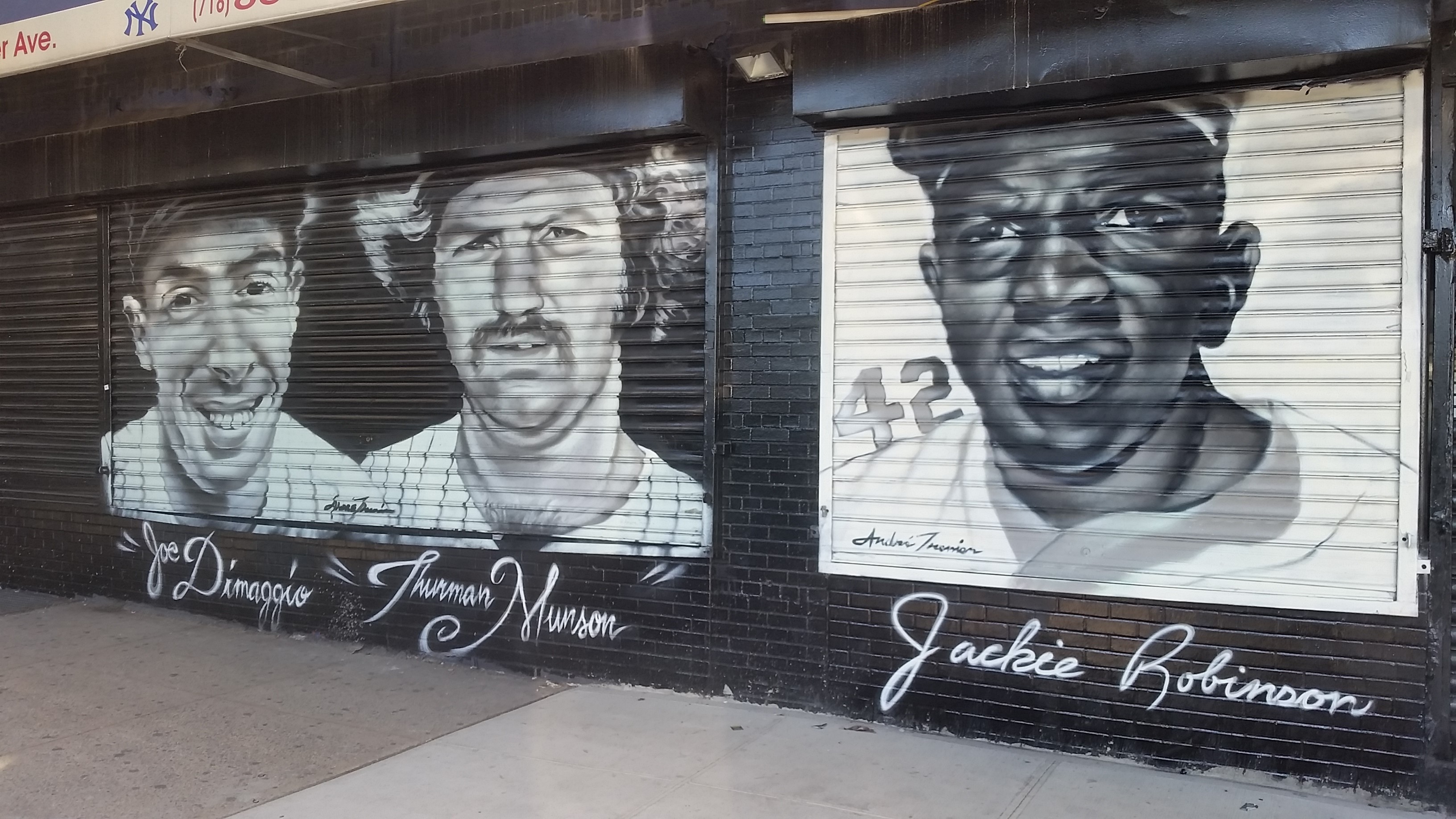 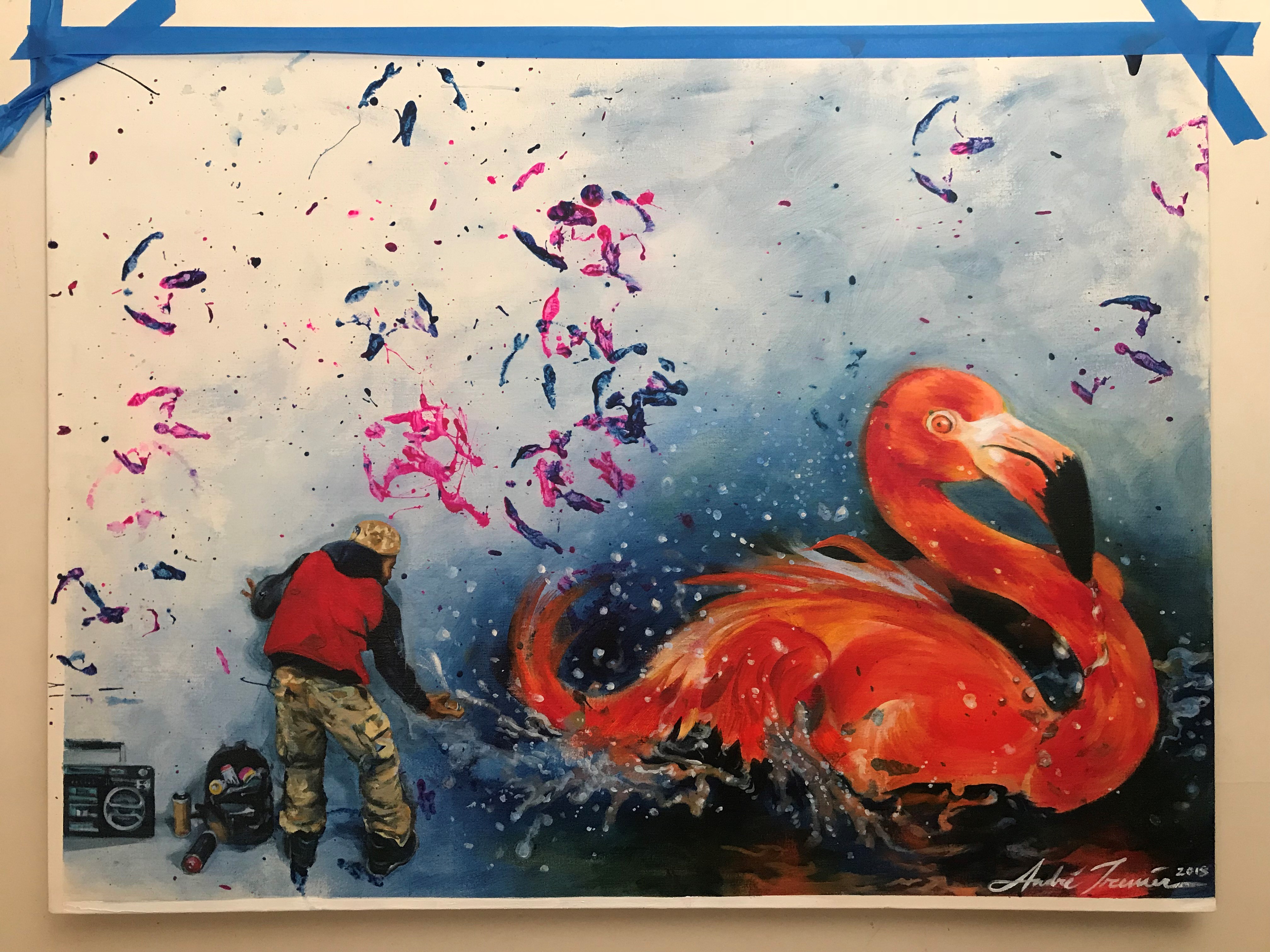 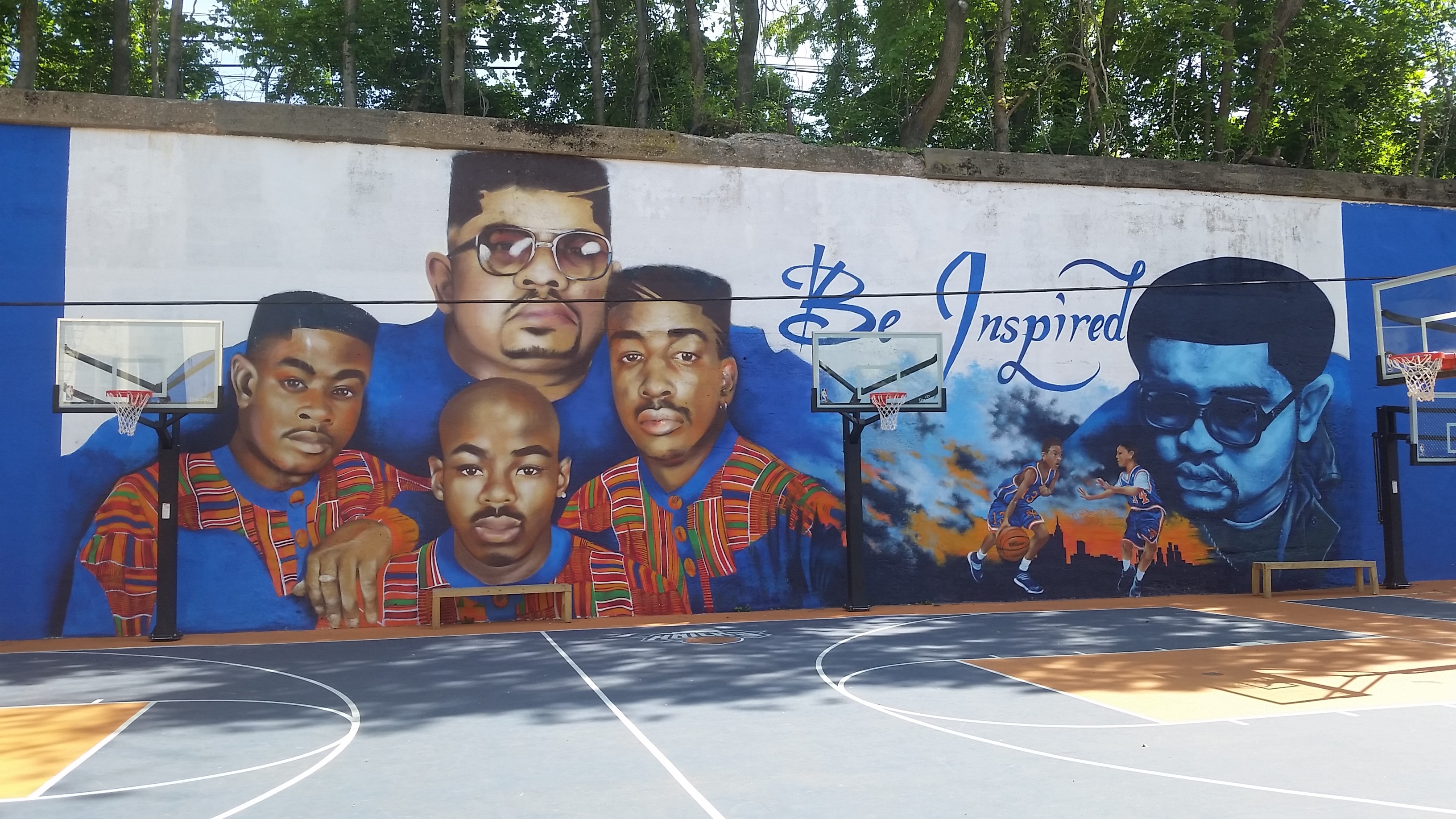 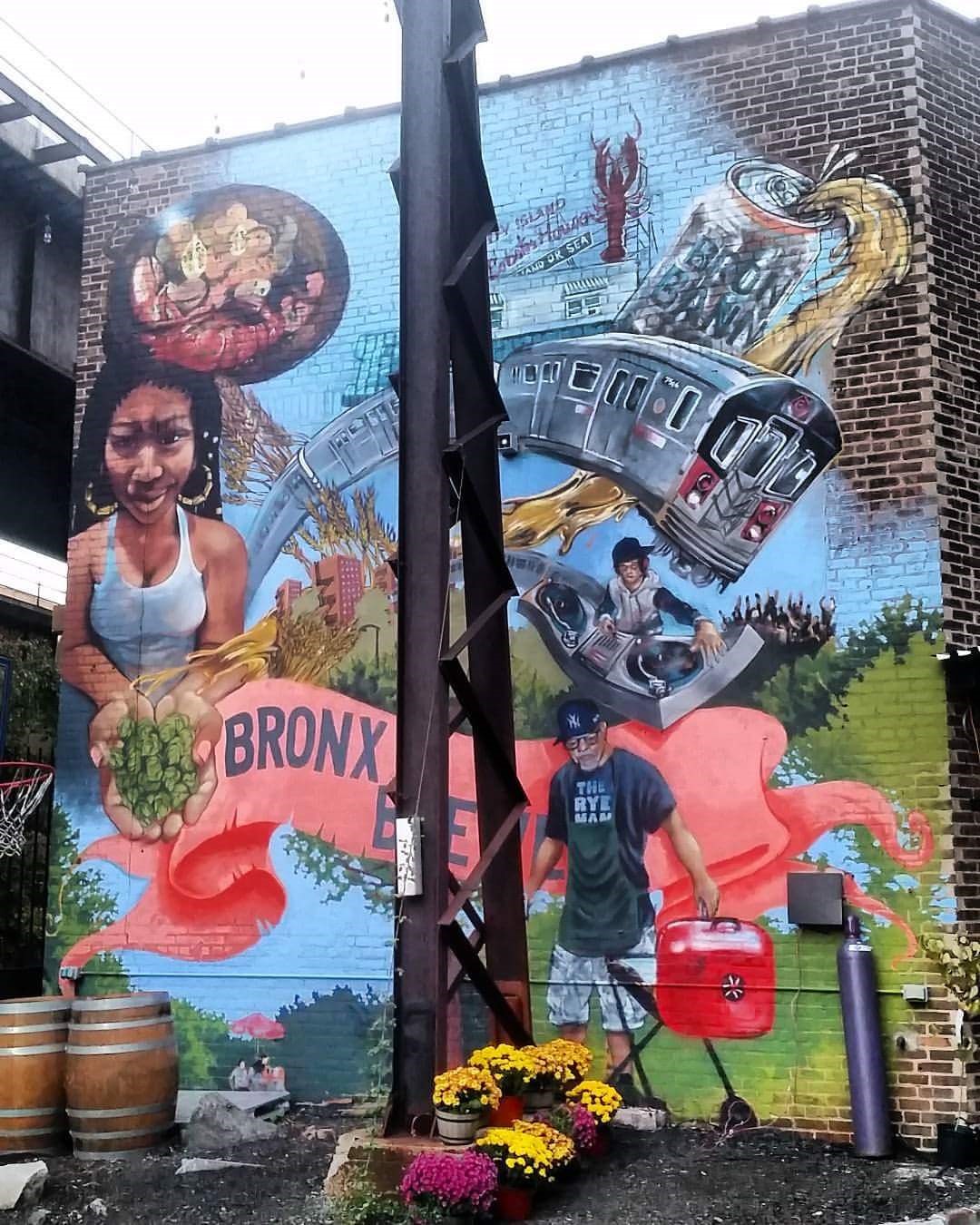 Born and raised in the Bronx, André Trenier has spent the better part of the last two decades establishing himself as one of the premier artists to emerge from the birthplace of hip hop. 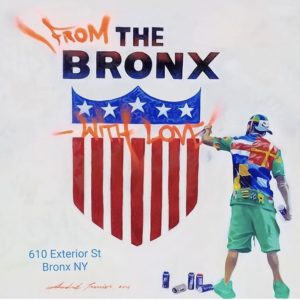 A graduate of the famed LaGuardia School for the Performing Arts and the University of the Arts in Philadelphia, André first made his name as one of the most acclaimed sneaker customizers in the world, with works appearing on ESPN, in Rolling Stone, XXL, and Complex, for celebrity clients ranging from Magic Johnson to Elton John.

To hone his skills, André began competing in local live art competitions, where he quickly emerged as the star attraction. He was named captain of the Art Battle International team that competed across Europe, with contests in Paris, Marseille, Lyon, Barcelona and Valencia, where he won a special award for most individual and collaborative wins.

André has also emerged as one of New York’s premier muralists, with over two dozen murals in the Bronx and Washington Heights alone. Notable works include a portrait of Heavy D and the Boyz in Mt. Vernon for the Knicks and Chase bank; a six-story basketball mural on the lower east side commissioned by The Kevin Durant Foundation and Roc Nation; and a 150-foot wall on 167 Street and Gerard Avenue, commissioned by the Bronx Museum (documented by www.Complex.com in a blog entitled “The Coolest Street Art in New York Right Now”).

To baseball fans, André may be best known for his iconic murals on the storefront gates surrounding Yankee Stadium, frequently featured on the YES Network, depicting sports and entertainment greats including Muhammad Ali, Joe DiMaggio, Reggie Jackson, DJ Kool Herc, Derek Jeter and many others. He was also selected to design a series of signature hats with Yankee great Gary Sanchez as part of a national campaign with the team and Pepsi.

André is currently an Artist in Residence at the Andrew Freedman Home in the Bronx, participating in community service programming for local residents. He is in the process of designing a signature collection of Champion eyewear for L’amy and will appear as part of a group show in Chicago featuring graffiti legends from New York and Chicago (opening 7/19).

Dollar Discount & Party has an amazing selection of party favors, both seasonal and year round. From birthday parties, baby showers, bridal showers, they have it all! Their vast selection of products also includes school supplies, household needs, and more!

Since 1935, the company’s dedication to healthy living has expanded its reach in the self-healthcare industry and around the world.

At BJ’s, our Members shop smarter and save more every day on everything from organics to electronics. Stop by our in-Club Member Services Desk and ask how to get:

CUSTOMERS WHO ARE AGE 60 AND OVER MAY SHOP FROM 8AM-9AM. THE STORE WILL THEN BE OPEN TO THE GENERAL POPULATION
Monday – Saturday: 9AM – 9PM
Sunday: 9AM — 8PM

The Home Depot is your one-stop destination for home improvement products and DIY project know-how.

We’re committed to providing a fun and convenient shopping experience, with unique products at affordable prices. Our mission is…

CUSTOMERS WHO ARE AGE 60 AND OVER MAY SHOP FROM 8AM-9AM. THE STORE WILL THEN BE OPEN TO THE GENERAL POPULATION
Sunday – Saturday: 9AM – 9PM

TAKE-OUT AND DELIVERY IS AVAILABLE THROUGH THE RESTAURANT, GRUBHUB AND UBER-EATS.
SUBWAY is the leading choice for people seeking quick, nutritious meals that the whole family can enjoy. We are guided by a passion to delight customers by serving fresh, delicious, made-to-order sandwiches.

Best Buy operates a global portfolio of brands with a commitment to growth and innovation. Our employees strive to provide customers around the world with superior experiences by responding to their unique needs and aspirations. To meet the unique product and service needs of our customers, our stores and operating models are being transformed to shift our focus from product-centric to customer-centric,— a move that poises Best Buy to truly offer the entertainment and technology solutions that meet our customers’ needs, end-to-end.

TAKE-OUT & DELIVERY AVAILABLE THROUGH THE RESTAURANT, GRUBHUB AND UBER-EATS.  $5 LARGE PIZZA FOR STUDENTS! (Must Show ID)
The ultimate place Where A Kid Can Be A Kid® and parents can enjoy every moment. That’s why Chuck E. himself takes pride in providing a safe, family-friendly environment that kids and parents will love.

TAKE-OUT & DELIVERY AVAILABLE THROUGH THE RESTAURANT, APPLEBEE’S APP,  GRUBHUB & UBER-EATS. Free Delivery for Orders over $15. Use code FREEDELIVERY.
Applebee’s is the largest casual dining chain in the world, with locations throughout the U.S. and many countries worldwide. We take pride in having a friendly, welcoming, neighborhood environment for both our staff and guests that makes everyone enjoy their Applebee’s experience.

Shop Bed Bath & Beyond for bedding, bath towels, kitchen electrics, cookware, window treatments, storage items, gifts and much more! Walk through our stores and you never know what you’ll find… everything from “gotta have” items that serve every basic need to “ah-ha” products that solve common household quandaries to new and unique items that just hit our shelves. We believe in an every day low price policy that allows our customers to buy with confidence. Our knowledgeable sales associates are eager to help adding an element of customer service that our customers have come to expect.

GameStop is committed to delivering great games to customers, regardless of how and where they play. Whether you game on the go with a mobile device or spend hours console gaming with your guild, GameStop is the number one multichannel video game choice.

GameStop offers customers the most popular games, hardware and game accessories for next generation video game systems and the PC. In addition, our buy, sell, trade program creates value for customers while recycling products no longer being played.

We sell the #1 selling brand of home furniture in North America, Ashley Furniture. At Harlem Furniture, we are proud of our past, encouraged for our future and genuinely excited to make furniture for the most important people there are – you.

Discover our Bronx Terminal, NYC showroom for all your home furnishing needs! Come peruse our furniture collection including quality bedroom, living room, and youth bedroom furniture, as well as our stylish home décor and area rugs selection. Visit the New York City store location closest to you to find affordable furniture for every room from Raymour and Flanigan!

At Burlington, you’ll find a large assortment of current, high-quality, designer and name-brand merchandise at up to 70% off department store prices every day. Choose from a large selection of coats, clothing, and shoes for the entire family. And don’t forget our great assortment of linens and home décor, plus furniture and accessories for baby at Baby Depot. Burlington is a convenient one-stop shopping experience with all the brands and styles you’re looking for, all at amazing prices!

Welcome to Marisco Centro, Seafood Restaurant and Fish Market! We are experts when it comes to seafood. Every time you visit us you will find our continuous efforts to serve you the best from the sea and the best taste. We maintain a high quality standard and a pleasant atmosphere to dine and celebrate.

​Level 1, In South Building, Near Restaurants

Rethink possible. AT&T is bringing it all together for our customers, from revolutionary smartphones to next-generation TV services and sophisticated solutions for multi-national businesses.

For more than a century, we have consistently provided innovative, reliable, high-quality products and services and excellent customer care. Today, our mission is to connect people with their world, everywhere they live and work, and do it better than anyone else.

Never pay full price for fabulous. Marshalls offers an ever-changing assortment of fashionable, brand-name family apparel, home fashions and other merchandise such as toys. Marshalls differentiates itself from T.J. Maxx with a full line of family footwear and The Cube, an expanded juniors department, as well as a broader men’s selection. Marshalls also operates the Marshalls Shoe Shop, which is a standalone store featuring shoes and accessories.

At Sprint, we believe in the power of being Unlimited. And thanks to an Everything Data plan, you get Unlimited text, web and calling to any mobile, all while on the Sprint network.

​Level 1, Near Boulevard Shops, West Side

​​Level 2, Near River Avenue, East Side

T-Mobile operates America’s largest 4G network, and is delivering a compelling 4G experience across a broad lineup of leading devices in more places than competing 4G services. T-Mobile USA’s innovative wireless products and services help empower people to connect to those who matter most.

​​Level 1, Near Boulevard Shops, West Side

Feel Beauty Supply is located throughout Queens, Brooklyn, Manhattan, and in New Jersey. We carry a diverse selection of cosmetics, hair care products and tools, accessories and wigs, all within our customers’ budget. Select locations also have a beauty and hair salon to achieve the best you!

Hostos Community College is an educational agent for change, transforming and improving the quality of life in the South Bronx and neighboring communities since 1968.

We are the neighborhood bank for thousands of communities across the country. We serve approximately one of out of every six Americans through more than 5,600 bank branches; 20,000 ATMs; mortgage offices; online and mobile banking; as well as relationships with auto dealerships, schools and universities.

For more than 60 years, Toys “R” Us has been a favorite destination for kids and grown-ups alike with its impressive assortment of toys, games, sporting goods, electronics, software, baby products, children’s apparel and juvenile furniture. With nearly 600 stores throughout the United States, Toys “R” Us offers a broad selection of new toys, old favorites, Toys “R” Us exclusives and many other great values under one roof. With knowledgeable and toy-trained staff members always ready to help customers, Toys “R” Us is THE authority when it comes to finding the perfect toy.

BX Sports has been a strong presence in the Bronx since 1997, when our flagship store was opened on White Plains Road. Since then, several other locations have been opened throughout the borough, and most recently in New Jersey as well.

We are continuously receiving new footwear from brands that bring the hottest styles and colors, providing BX Sports with a dynamic showcase of the newest footwear fashion available for men, women, and kids.

The sales staff at all of our locations is knowledgeable, and well versed on all of the products we offer. The store managers have been in the business for many years and they has built a strong retail team, training their staff in understanding customers, brands, and all the latest trends.

​
As THE baby products authority, Babies “R” Us offers the best and broadest assortment of everything new and expectant parents need when preparing for baby’s arrival, setting up a nursery, traveling with a newborn and establishing a safe environment for baby.

Babies “R” Us features an unparalleled selection of cribs and furniture, car seats, strollers, formula, diapers, bedding, clothing for preemies through size 48 months, toys and an array of unique gift ideas. All of this is paired with the offering of a best-in-class baby registry, exceptional customer service from a trained team of product specialists, plus special services and amenities.